MILO Philippines officially welcomes Carlos Edriel “Caloy” Yulo as its newest Champion. A gymnastics world champion, Southeast Asian Games gold medalist, and 2020 Olympian, Yulo joins a roster of decorated, world-class athletes who have continuously showcased excellence in their sport and have served as an inspiration for young children everywhere. The newest MILO Champion stars in the brand’s latest campaign that encourages moms to unlock the inner Champion in their kids and achieve their dreams with Yulo’s true-to-life story of overcoming hardships and constantly striving to get better. The ad ends with the launch of MILO’s NEW, more delicious Champion Formula, with more Champion Energy Nutrients to help fuel tomorrow’s champions.

Yulo is fresh off a historic first-place finish at the floor exercise of the 2019 Gymnastics World Championships in Stuttgart, Germany and his impressive performance at the 30th Southeast Asian Games, where he hauled in two golds and five silvers. His rise in the sport has captivated millions, earning him adoring fans who’ve resonated well with his humble beginnings. He has the chance to bring even more honor to the country as he gears up for this year’s Olympics in Tokyo. In the brand’s newest commercial, the spotlight is put on Yulo’s inspirational true-to-life Champion story, one that displays the importance of ambition and perseverance. From being a young curious kid tumbling around at home and in the streets of Manila to testing his mettle at the MILO Little Olympics and eventually conquering the global stage, Carlos has had the support of his family to guide him and motivate him through it all. This story echoes the call to unleash the inner Champion in every child with the NEW MILO and celebrate tomorrow’s Champions. 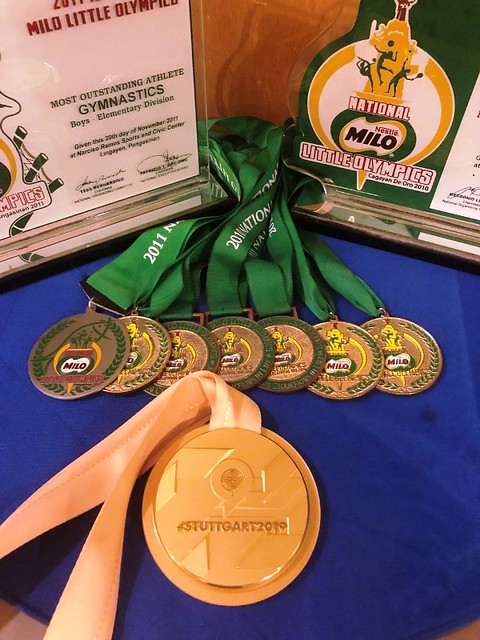 As a MILO Champion, Caloy joins the likes of Kiefer Ravena, Alyssa Valdez, Pauline Lopez, Mary Joy Tabal, and Javi and Juan Gomez de Liano in advocating for kids to get into sports and living out the important life values learned from it, such as discipline, teamwork, and confidence. “Sobrang proud and thankful po ako na maging part ng MILO. Dito ako nagsimula sa  sports journey ko, and I hope that I can continue to inspire others na maging champions din in their own ways,” shared Yulo, who traces his gymnastics roots in the MILO – CLUB GYMNASTICA Sports Clinics and the MILO Little Olympics, where he won 4 consecutive Most Outstanding Athlete awards, and the Palarong Pambansa, where he secured several golds in multiple appearances representing NCR (National Capitol Region). His impressive accolades early on were a testament to his undeniable, extraordinary potential in the sport.

MILO launches its NEW Champion Formula For Tomorrow’s Champions, now with more milk, at mas siksik pa sa Champion Energy Nutrients na PROTOMALT®, Iron, at B-Vitamins (higher amounts of Vitamins B2, B3, B6, and B12). The NEW and improved MILO Champion formula is made even more delicious and more nutritious for kids to enjoy even more!

“We are very excited to have kids taste and enjoy the NEW MILO Champion Formula and make it a part of their daily breakfast habit. We believe that tomorrow’s Champions are already here today, and aim to have the champion energy and winning spirit of MILO help them keep improving themselves in everything they do in school, at home, and in sports,” added Veronica Cruz, Nestle Philippines Vice President.

“Great things truly do start from small beginnings. With the Champion Energy from the NEW MILO and Carlos Yulo’s Champion story, we look to continue our mission to nourish the ambitions of the Filipino youth and build a nation of Champions,” adds Cruz. For more information and updates, log on to the official website (http://www.milo.com.ph) or the MILOÒ Philippines Facebook page (https://www.facebook.com/milo.ph). Follow MILO on Twitter (@MiloPH) and Instagram (@MiloPhilippines).